Representing one of the largest industrial districts in Norway, leaders of the Porsgrunn municipality aim to reduce their chemical usage by 10%, in line with UN sustainability goals. The project is now being included in the 2022 climate...

Representing one of the largest industrial districts in Norway, leaders of the Porsgrunn municipality aim to reduce their chemical usage by 10%, in line with UN sustainability goals. The project is now being included in the 2022 climate budget action plan.

Safe use and handling of chemicals are vital for a safe workday both for Porsgrunn’s employees and residents. Besides being a threat to health and safety, chemicals also account for significant CO2 emissions. A recent report by the European Environment Agency (EEA) states that the chemical industry accounts for the highest energy usage in the world. 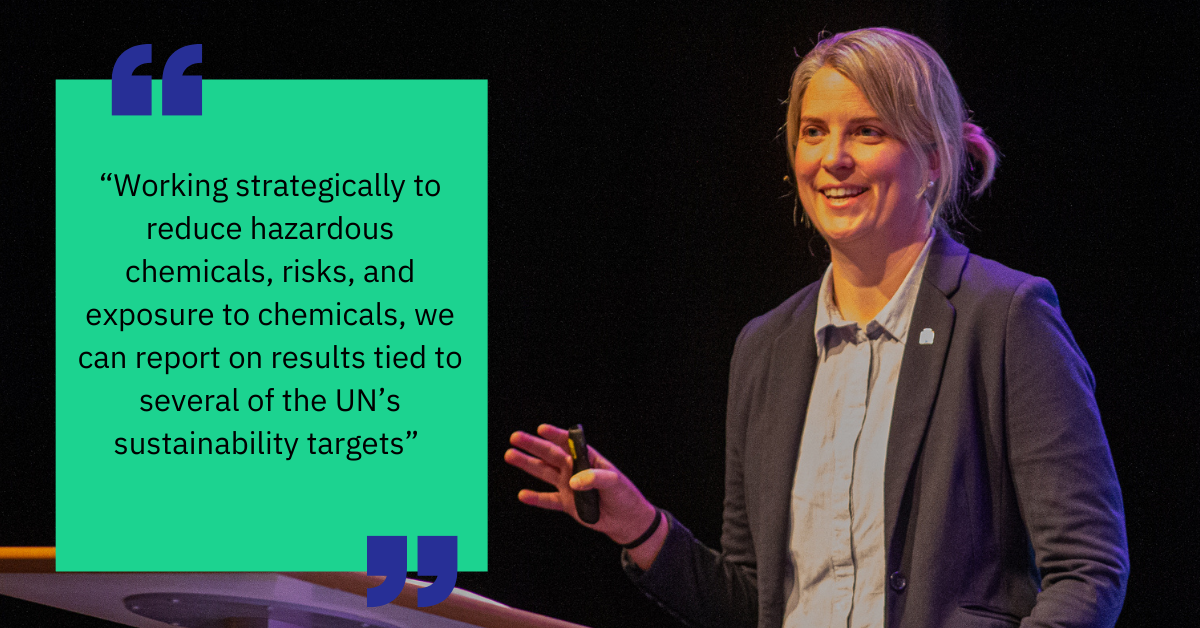 “Although some might think that chemicals aren’t relevant in a climate budget, we feel that to succeed in our vision for a «greener Porsgrunn», we need to reduce our chemical usage wherever possible. By doing this we hope to, among other things, lower our indirect emissions,” states Yngvil Holt, climate coordinator at Porsgrunn Municipality.

11 out of 17 UN sustainability targets will be reported on

By working strategically to reduce hazardous chemicals, risks, and exposure to chemicals, the municipality can report on results tied to several of the UN’s sustainability targets. Two of the targets are directly related to chemicals but that’s only the beginning, says Holt, and adds:

“Chemicals have huge consequences for life on land and in water. The key is to consume and produce responsibly, which also boosts innovation in the field. Through working with the climate budget, it’s become clear that we’re completely dependent on cooperation across the municipality’s departments and projects, also to find possibilities to involve industries and businesses – and voilà, because of this, sustainability target number 17 also becomes relevant.”

Environment, politics, and economy all under the same umbrella

The climate budget is the first of its kind in the municipality. It will be included in the action plan and will become a part of the their most important budget.

“To succeed in this project as one of the largest industrial municipalities in Norway, it’s important to anchor climate work to the highest administrative level (as a chief municipal executive) but also to the highest political level. I receive great support from both administrative bodies and politicians, and everyone agrees on the importance of strengthening climate work to reach the municipality’s targets, Holt notes.”

As an addition to the climate targets detailed in the action plan, the municipality has several subgoals that are reflected in its business plan. One of these is to complete risk assessments and to reduce or substitute hazardous chemicals. With 44 businesses and over 100 departments, the number of products used in, for example, education, health and safety, water and sewage, maintenance of machinery, and sanitation, is enormous. The cleaning process is underway, and thousands of products are to have their risks assessed and added to a register: the chemical inventory.

“I’ve seen some incredible commitment from employees even if this project has resulted in a temporarily higher workload for some. Everyone’s very motivated to do their part for better health and a cleaner environment. Many employees’ attitudes have improved in a very short time. People have become more aware, which has led to some even examining the chemicals they use at home.”, says Tove Sørensen, HR-advisor at Porsgrunn municipality.

To support the municipality’s climate project, the digital solutions provided by EcoOnline are used to monitor, report, and assess the risks of chemicals. Sørensen adds that having clearly defined KPIs are important to ensure success:

“The targets function as a driving force and as an incredible motivator to work out of. That and to know that the more we work with monitoring and assessing risks, the easier it’ll be to see the results and reach the targets we’ve set out for us.”

Helene works as Head of PR, Brand & Communication. She is passionate about connecting EcoOnline's solutions with the higher purpose of creating safer and more sustainable workplaces for people and the environment. As a former journalist, she dedicates her writing to translating complex topics into easy-to-read and engaging stories. Helene also holds a degree in Sustainability.

Sustainability is an industry of definitions, and the overwhelming number of acronyms makes it challenging to keep...

Truly embodying health and safety excellence is a difficult task, no matter your industry, company size or experience....

The housing crisis in the UK has been escalating in severity year on year. The construction industry has continuous...